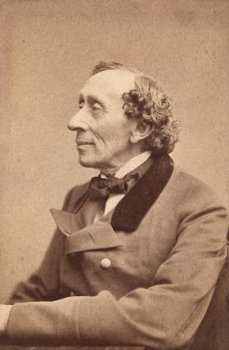 The Little Mermaid is a  fairy tale by Danish poet and author Hans Christian Andersen. It is the story of a mermaid that wants to become human like the Prince that she loves. She wants this so much that she is willing to give up everything so that she may be with her prince.

The title of this  Fairytale in Danish is "Den lille havfrue". This translates into "the little Seawoman" literally. 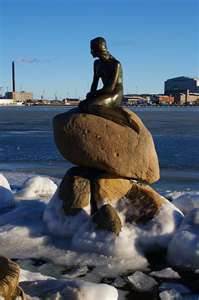 Little Mermaid fairy tale is so popular that there is a statue of a mermaid in Langelinie, Copenhagen, the capital of Denmark. Based on the fairy tale of the same name by Hans Christian Andersen, the small and unimposing statue (with a height of 1.25 metres (4 ft)) is a Copenhagen icon and a major tourist attraction.

The statue of the Little Mermaid was commissioned in 1909 by Carl Jacobsen, son of the founder of Carlsberg, who had been fascinated by a ballet about the fairytale in Copenhagen's Royal Theatre and asked the prima ballerina, Ellen Price, to model for the statue. The sculptor Edvard Eriksen created the bronze statue, which was unveiled on 23 August 1913. The statue's head was modelled after Price, but as the ballerina did not agree to model in the nude, the sculptor's wife, Eline Eriksen, was used for the body.

Far out in the ocean the water is as blue as the petals of the loveliest cornflower, and as clear as the purest glass. But it is very deep too. It goes down deeper than any anchor rope will go, and many, many steeples would have to be stacked one on top of another to reach from the bottom to the surface of the sea. It is down there that the sea folk live.

Now don't suppose that there are only bare white sands at the bottom of the sea. No indeed! The most marvelous trees and flowers grow down there, with such pliant stalks and leaves that the least stir in the water makes them move about as though they were alive. All sorts of fish, large and small, dart among the branches, just as birds flit through the trees up here. From the deepest spot in the ocean rises the palace of the sea king. Its walls are made of coral and its high pointed windows of the clearest amber, but the roof is made of mussel shells that open and shut with the tide. This is a wonderful sight to see, for every shell holds glistening pearls, any one of which would be the pride of a queen's crown.

The sea king down there had been a widower for years, and his old mother kept house for him. She was a clever woman, but very proud of her noble birth. Therefore she flaunted twelve oysters on her tail while the other ladies of the court were only allowed to wear six. Except for this she was an altogether praiseworthy person, particularly so because she was extremely fond of her granddaughters, the little sea princesses. They were six lovely girls, but the youngest was the most beautiful of them all. Her skin was as soft and tender as a rose petal, and her eyes were as blue as the deep sea, but like all the others she had no feet. Her body ended in a fish tail.

The whole day long they used to play in the palace, down in the great halls where live flowers grew on the walls. Whenever the high amber windows were thrown open the fish would swim in, just as swallows dart into our rooms when we open the windows. But these fish, now, would swim right up to the little princesses to eat out of their hands and let themselves be petted.

Outside the palace was a big garden, with flaming red and deep-blue trees. Their fruit glittered like gold, and their blossoms flamed like fire on their constantly waving stalks. The soil was very fine sand indeed, but as blue as burning brimstone. A strange blue veil lay over everything down there. You would have thought yourself aloft in the air with only the blue sky above and beneath you, rather than down at the bottom of the sea. When there was a dead calm, you could just see the sun, like a scarlet flower with light streaming from its calyx.

Each little princess had her own small garden plot, where she could dig and plant whatever she liked. One of them made her little flower bed in the shape of a whale, another thought it neater to shape hers like a little mermaid, but the youngest of them made hers as round as the sun, and there she grew only flowers which were as red as the sun itself. She was an unusual child, quiet and wistful, and when her sisters decorated their gardens with all kinds of odd things they had found in sunken ships, she would allow nothing in hers except flowers as red as the sun, and a pretty marble statue. This figure of a handsome boy, carved in pure white marble, had sunk down to the bottom of the sea from some ship that was wrecked. Beside the statue she planted a rose-colored weeping willow tree, which thrived so well that its graceful branches shaded the statue and hung down to the blue sand, where their shadows took on a violet tint, and swayed as the branches swayed. It looked as if the roots and the tips of the branches were kissing each other in play.

Nothing gave the youngest princess such pleasure as to hear about the world of human beings up above them. Her old grandmother had to tell her all she knew about ships and cities, and of people and animals. What seemed nicest of all to her was that up on land the flowers were fragrant, for those at the bottom of the sea had no scent. And she thought it was nice that the woods were green, and that the fish you saw among their branches could sing so loud and sweet that it was delightful to hear them. Her grandmother had to call the little birds "fish," or the princess would not have known what she was talking about, for she had never seen a bird.

"When you get to be fifteen," her grandmother said, "you will be allowed to rise up out of the ocean and sit on the rocks in the moonlight, to watch the great ships sailing by. You will see woods and towns, too."

For the rest of the story link here:

Home for 'The Little Mermaid' page