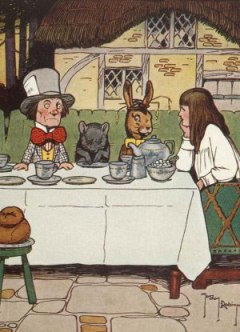 The character of Alice is based on a real girl, called Alice Liddell, who was one of the author's child-friends.

Alice is the main character of the story "Alice's Adventures in Wonderland" and the sequel "Through the Looking Glass and what Alice found there".

She is a seven-year-old English girl with lots of imagination and is fond of showing off her knowledge. Alice is polite, well raised and interested in others, although she sometimes makes the wrong remarks and upsets the creatures in Wonderland. She is easily put off by abruptness and rudeness of others. 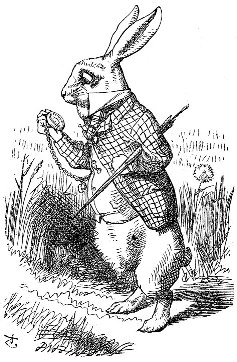 The White Rabbit is the first of many Alice In Wonderland characters Alice encounters. She follows him when he hurries into his hole and thereby enters Wonderland. The White Rabbit is nervous and always in a hurry. However, he is confident enough about himself to contradict the King of Hearts. He appears to be late for his job with the Duchess.

While walking through Wonderland, Alice comes upon his house where the White Rabbit, still in a hurry, mistakes her for his housemaid Mary Ann, and orders her to get his gloves and a fan. When she grows and gets stuck in the house, the Rabbit orders Pat to get her out. In the end we discover that the White Rabbit is a herald in the Queen of Heart's court. 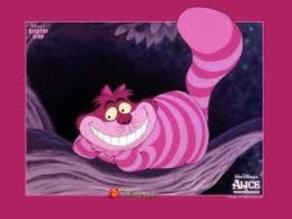 The Cheshire Cat is the only character in Wonderland who actually listens to Alice. With his remarks, he teaches Alice the 'rules' of Wonderland. He gives her insight in how things work down there.

The Cheshire Cat is the cat of the Duchess. Alice meets it when she leaves the Duchess house, and finds it in a tree. It constantly grins and can disappear and reappear whenever it likes. Sometimes it disappears and leaves its grin behind.

"I wish you wouldn't keep appearing and vanishing so suddenly; you make one quite giddy!".

"All right," said the Cat; and this time it vanished quite slowly, beginning with the end of the tail, and ending with the grin, which remained some time after the rest of it had gone.

"Well! I've often seen a cat without a grin," thought Alice; "but a grin without a cat! It's the most curious thing I ever saw in all my life!"

Introduced in Chapter IV and the main centre of interest of Chapter V ("Advice from a Caterpillar"), the Caterpillar is a hookah-smoking caterpillar exactly three inches high which, according to him, "is a very good height indeed" (though Alice believes it to be a wretched height).Alice does not like the Caterpillar when they first meet, because he does not immediately talk to her and when he does, it is usually in short, rather rude sentences, or difficult questions.

He asks Alice to repeat the poem You Are Old, Father William, which comes out rather strange like many of the nursery rhymes Alice attempts in Wonderland. The Caterpillar tells Alice how to grow and shrink using the mushroom upon which he is sitting.

The original illustration by John Tenniel above, is something of a visual paradox; the caterpillar's human face appears to be formed from the head and legs of a more realistic caterpillar.[1] In another illusion, the flowers on the right of the illustration appear to be a form of tobacco, while the caterpillar is smoking heavily. 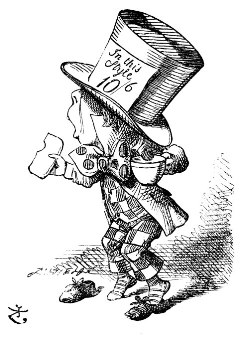 The Mad Hatter is the first of many Alice In Wonderland characters Alice encounters. The Mad Hatter is one of the members of the Mad Tea Party. Later he also appears as a witness during the trial. He occasionally is very rude and provokes Alice during the tea party. When he is called upon by the Queen, he is very nervous and frightened.XX

Although everybody calls him 'the Mad Hatter', Lewis Carroll never actually called him that in the story. He just referred to him as 'the Hatter'.

The phrase 'mad as a hatter' was common in Carroll's time. 'Mad as a hatter' probably owes its origin to the fact that hatters actually did go mad, because the mercury they used sometimes gave them mercury poisoning.

Many people wonder about the tag on the Mad Hatter's hat. It is a price tag, displaying the price 'ten and six': 10 shillings and 6 pennies.

Alice In Wonderland Images of Characters from the Burton Movie. 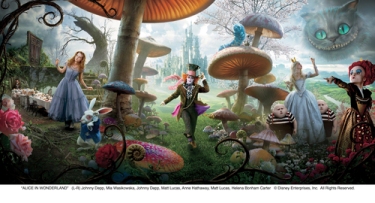