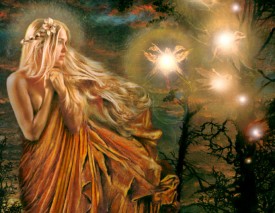 Faeries along with
Elves,
Mermaids,
Dragons,
Dwarves,
Leprechauns,
Fae
and many other creatures in folklore, are supernatural beings endowed with the powers of magic and enchantment.
The term Fairies is often used having the same meaning as Faeries.

We will  discuss Faeries that are in legends and folklore from different countries and cultures around the world.

Literature from all over the world has tales of these fantasy creatures having interactions with humans. These beliefs from both written and oral folklore date way back to ancient times.

Traces of these fantasy creatures come from many sources:

Fairies
From an article in "Raven's Shire"
"Fairies are likely far stranger and more wonderful than you ever imagined. Perhaps the most important thing you need to understand about fairies is that they were distant beings. Indeed, fairies were just as likely to live in the village or people's homes as they were in the wilderness"........More

Some Tales Of Faery Folklore 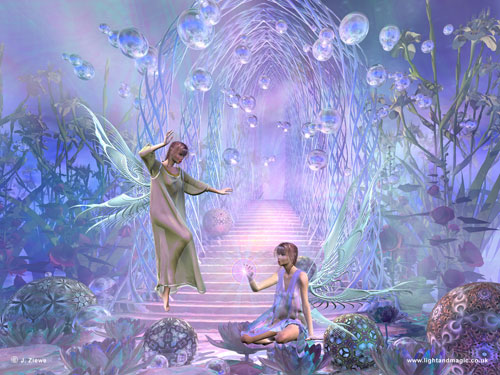 Much of the folklore from this time revolves around protecting ourselves from malice.  In particular, it  describes how to prevent these creatures from abducting older people or stealing babies and substituting changelings for the babies. Humans, to protect themselves from these fantasy creatures, use such means as cold iron (they don't like iron and will not go near it) or charms made of rowan and herbs, or they totally avoid these fantasy creatures by staying out of locations known to be frequented by these little pixies.

English folklore
These wee people are sometimes known as Pixies, Sprites or spirits. They are commonly represented as mischievous imps who delights in flustering young maidens and leading travelers astray.

Irish Folklore
In Ireland, the Tuatha de Danaan was one of the early races of conquerors known for their great power. It is thought that they were driven underground. The goddess Danu was their mother,

Welsh Folklore
William Butler Yeats relates a Welsh version of this story in his tale The Stolen Child. Parents of a new baby could keep their child safe from abduction by the Fae by using one of several simple charms: a wreath of oak and ivy kept faeries out of the house, as did iron or salt placed across the door step. Also, the father's shirt draped over the cradle keeps the Fae from stealing a child.

Other FolkloreIn some stories, examples are given of how one can see a faerie. It is believed that a wash of marigold water rubbed around the eyes can give mortals the ability to spot the Fae. It is also believed that if you sit under a full moon in a grove that has trees of ash, oak and thorn, the Fae will appear.

Female Faeries  have a hard time giving birth.  Many children that survive when born are not normal.  The mothers , all of which like beautiful babies, really don't like these babies that are not normal and refuse to keep them.  They sometimes  try to exchange them for human children.  If they do, these children are known as changelings.

Today, the depictions, especially in children's stories, rest largely upon the old folklore tradition. Here they were generally described as serious and sinister. There are some exceptions that include the one that swaps children's teeth for gifts, the Godmother in "Cinderella" and "Snow White and The Seven Dwarfs". Folklore about these mystical creatures is particularly prevalent in Ireland,  Wales, and Scotland.

The Tooth Fairy is a modern example of a fun Faery that interacts with us humans.

Is the Tooth Fairy Real?

Ask any child as he wakes up and finds a present under his pillow in exchange for a baby tooth. Click here for more info.