Little Red Riding Hood is a very popular fairy tale about a young girl meeting a wolf while delivering a cake to her Grandmother. 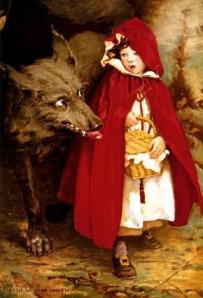 Many times throughout history, this story has been changed to make it adapt to that particular period and to different audiences. If there is a single moral to be learned from the different versions, it would seem to be "Be aware of the difference between the safe village and the danger that lies beyond.

Versions of Little Red Riding Hood date back to a time when only oral stories were told. Many of these were for adults as they contained a lot of sexual and violent interaction.

There is evidence that the story was told in the 14th century by French Peasants. In Italy there is a folktale called 'La Finta Nonna' which translates into 'The False Grandmother'.

It appears that similar folktales were told all over Europe. In these versions the wolf meets the girl on the path through the woods. He then rushes ahead of the girl to her grandmother's house where he kills the grandmother and butchers her like an animal. He then sets a meal for the girl with the remains to be eaten by the girl.

She sometimes does eat this meal. In some of these tales, the wolf asks the girl to take off all her cloths and burn them. Once she is in bed, she discovers the wolf's disguise. In an attempt to escape, she complains about the need to go potty and does not want to do that in bed. The wolf ties a piece of cord to her so that she can't escape. The girl is too smart for that. She ties a string to the door latch and escapes. In these tales, she escapes on her own, without help from any adult. 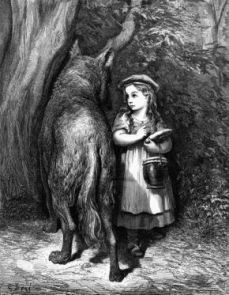 In the 17th century, a French author, Charles Perrault is the first person to write of this folktale. In 1697 he wrote "Histoires et contes du temps passé, avec des moralités. Contes de ma mère l'Oye) which translates to "Tales and Stories of the Past with Morals" which included this story. Printed inside the front cover frontispiece was "Tales of Mother Goose". Perrault states that he did not invent any of the stories found in this book, but just repeated Folk tales he heard in the French countryside. In his version "le petit Chaperon Rouge" the girl is wearing a red riding cloak with a hood. The tale is similar to the oral stories but with a different ending. At the end of the story, she is devoured by the wolf. The Brothers Grimm published in 1812 two different versions of the story in "Children's and Household Tales". These versions were told to the brothers by two sisters. Jeanette Hassenpflug told them the first version which became the "Little Red Riding Hood" that we all know of today. It is by far the most popular English version. In this story, the wolf devours the grandmother and Red Riding Hood after a fierce battle. A hunter passing by hears the screams and breaks in and rescues the girl and her grandmother by slicing the wolf open. They are both OK. To kill the wolf, the three of them fill his body with stones and dump him in a well.

The second story as told to them by the other sister, Marie Hassenpflug is made into a sequel. This story takes place after they have survived the first wolf. In this tale, there is a second wolf that climbs on the roof. He is then tricked into leaning way over the edge and falls off into a trough where he drowns. In yet another versions, the wolf puts the grandmother in a closet and Little Red Riding Hood and her Grandmother are saved by the woodsnan before the wolf has a chance to eat them.

Many authors after the Grimms, have made changes to this tale and used it as the plot for their work.

Little Red Riding Hood. This very popular fairy tale is about a young girl meeting a wolf while delivering a cake to her Grandmother. Versions of this story date back to a time when only oral stories were told. Many of these were for adults as they contained a lot of sexual and violent interaction.

Many times through out history, this story has been changed to make it adapt to that particular period and to different audiences.

The Brothers Grimm wrote the story considered to be the basis for the most popular version of Little Red Riding Hood. In their story a girl wearing a red cloak with a red hood is walking through the woods on her way to deliver food to her sick grandmother. A hungry wolf wants to eat the girl. When he approaches, Being young and innocent she strikes up a conversation and ends up telling him where she is going. He suggests that her grandmother might like some flowers. She thanks him for the idea and start to pick some flowers. He goes on ahead to her grandmother's house and knocks on the door pretending to be her. When he gets inside, he swallows her grandmother in one big gulp. He then dresses as her grandmother and gets in bed. When the girl arrives, he proceeds to swallow her too but not before a fight. A hunter hears the commotion, breaks in and rescues the girl and her grandmother by by cutting the wolf open. and cuts the wolf open. They are both OK. To kill the wolf, the three of them fill his body with stones.

In different versions, the wolf puts the grandmother. Other versions have Little Red Riding Hood being saved by the hunter before the wolf has a chance to eat her.

The moral seems to show the contrast between the safe village and the dangers of the forest. It teaches children not to "wander off the path".

The story of the hungry wolf and the hero being released unharmed from its belly is similar to the theme of the Russian tale "Peter and the Wolf", and The Brothers Grimm tale "The Wolf and the Seven Young Kids" This theme of restoration is similar to "Jonah and the whale".

The interaction in this tale between the wolf and Little Red Riding Hood is similar to what happens in some Norse folklore tales.