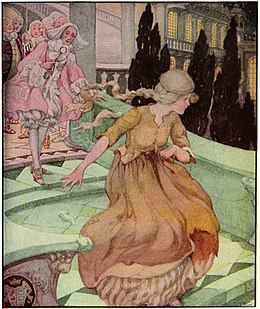 Versions of Cinderella or The Little Glass Slipper, is a folk tale, from the oral tales, about unjust oppression and a fantastic reward to the down trodden. Thousands of variants are known throughout the world.

One of the many versions of Cinderella was the story of Rhodopis, recounted by the Greek geographer Strabo around 7 BC, about a Greek slave girl who marries the king of Egypt, is usually considered to be the earliest known variant of the Cinderella story.

The most famous of all the versions of Cinderella was Cendrillon, which was written in France by Charles Perrault in 1697.  His additions to the story, including the pumpkin, the fairy-godmother and the introduction of a "glass" slipper.  He removed some of the violence and made it more fit for children.  Disney's Cinderella was one of the most popular Cinderella versions taken from this authors work.

Some other versions of Cinderella story

There's very little that's common to all the versions of Cinderella, but in general, you have a mistreated young woman, forced to do dirty menial work. She is unloved by her family. By some magical event, She meets an important man only after being mistaken for a much richer person but disappears.  The man must find her and be able to recognize her covered in dirt.

The story's title and it's main character's name are different in other languages, in English-language folklore Cinderella is by far the most popular name for this type of story.

The first European version of the story was published in Italy by Giambattista Basile in his Pentamerone in 1634.

The most popular version that is most widely known in the English-speaking world was published in French by Charles Perrault in Histoires ou contes du temps passé in 1697.

Aschenputtel, by the Brothers Grimm - Another of the well known versions of Cinderella was recorded by the German brothers Jacob and Wilhelm Grimm in 1812. The tale is called "Aschenputtel" ("Cinderella" in English translations). This version is much more intense than that of Perrault and Disney, in that Cinderella's father did not die and the stepsisters mutilate their feet to fit in the golden slipper. There is no fairy godmother, but rather help comes from a wishing tree that the heroine planted on her mother's grave. In the second edition of their collection (1819), the Grimms supplemented the original 1812 version with a coda in which the stepsisters suffer a terrible punishment for their cruelty.

The tales Catskin and Cap O'Rushes, are close relatives to what we know as Cinderella, but with characteristics that make their own offshoots easy to group together.

"Woman gives birth to a gourd." - This is the opening to the description of an Italian variant of the Cinderella folk tale — or, really, a relative of one of its relatives — taken from a book called Cinderella; three hundred and forty-five variants of Cinderella, Catskin, and Cap o'Rushes, abstracted and tabulated, with a discussion of mediaeval analogues, and notes, written by Marian Roalfe Cox and published in 1893. In this version of the story, the heroine is born inside a gourd and accidentally abandoned in the forest by it's mother.

Our heroine is discovered by a prince, who finds the talking gourd and takes it home. Later she gets out and becomes a servant named Zucchettina.

. The prince keeps her at the palace but mistreats her terribly, even beating her and kicking her to prevent her from attending his ball, but she gets there anyway without his knowing it's her . They meet and he gives her gifts and so on. Later, when she prepares his breakfast, she slips into his breakfast one of the gifts he gave her at the ball.  When he finds the gift, he recognizes that she is his beloved.

(It could be worse to our modern ears: One of the Cinderella variant entries is called "Little Saddleslut.")

Enlarge this imageIn 1812, the Brothers Grimm, Jacob and Wilhelm, published Children and Household Tales, a collection German fairy tales. This illustration accompanied the tale "Cinderella" and shows Cinderella being left by her stepsisters to do the housework. This image is from Grimms Eventyr (Grimm's Fairy Tales) by Carl Ewald, published in 1922.Ivy Close Images/Landov

This version is an obvious relative of Cinderella but not quite Cinderella; it's presented as one of the variants of Catskin, a related tale that also has a hard-working girl who meets a prince at a ball while in disguise and is then recognized and rescued.

That's not the strangest variant in the book, and it is certainly not the darkest. One begins with Cinderella, her two older sisters and their mother agreeing to a whimsical bet: First one to drop her spinning spool will be eaten by the others. When Mom proves clumsy, the sisters indeed eat her. (A deal's a deal?) Cinderella decides not to eat her mother, but to wait until the killing and eating is over, then bury her mother's bones. You know, out of respect. Fortunately, her mother's bones turn into coins and beautiful magic dresses. It's no fairy godmother, but you don't look your mother's gift bones in the ... mouth, I suppose.

There's a Vietnamese variant called Kajong And Haloek in which the evil foster mother of the Cinderella figure, Kajong, is tricked into eating the flesh of her own dead daughter (who boiled herself alive trying to be as beautiful as Kajong) — punishment for them both.