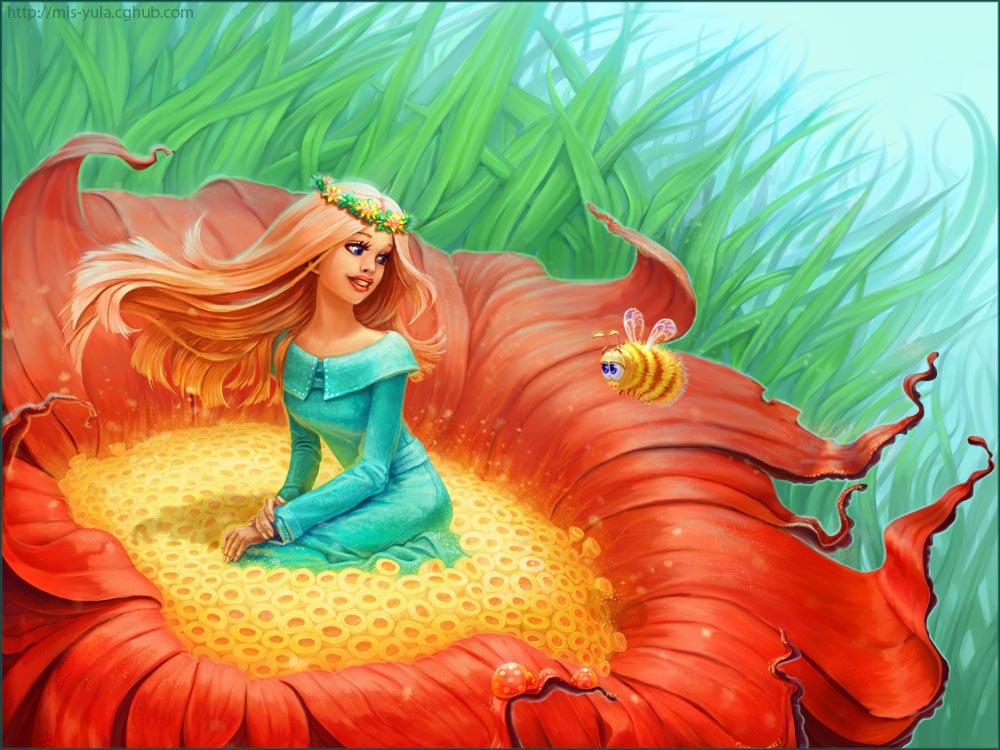 "Oh, that can be easily managed," said the fairy. "Here is a barleycorn of a different kind to those which grow in the farmer's fields, and which the chickens eat; put it into a flower-pot, and see what will happen."

"Thank you," said the woman, and she gave the fairy twelve shillings, which was the price of the barleycorn. Then she went home and planted it, and immediately there grew up a large handsome flower, something like a tulip in appearance, but with its leaves tightly closed as if it were still a bud.

"It is a beautiful flower," said the woman, and she kissed the red and golden-colored leaves, and while she did so the flower opened, and she could see that it was a real tulip. Within the flower, upon the green velvet stamens, sat a very delicate and graceful little maiden. She was scarcely half as long as a thumb, and they gave her the name of "Thumbelina," or Tiny, because she was so small.

A walnut-shell, elegantly polished, served her for a cradle; her bed was formed of blue violet-leaves, with a rose-leaf for a counterpane. Here she slept at night, but during the day she amused herself on a table, where the woman had placed a plateful of water. Round this plate were wreaths of flowers with their stems in the water, and upon it floated a large tulip-leaf, which served the little girl as a boat. Here the little maiden sat and rowed herself from side to side, with two oars made of white horse-hair. It really was a very pretty sight. She could, also, sing so softly and sweetly that nothing like her singing had ever before been heard. 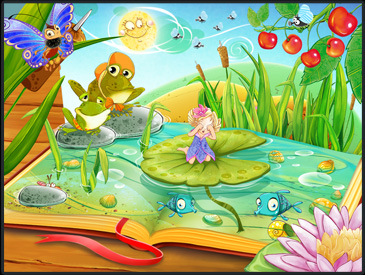 One night, while Thumbelina lay in her pretty bed, a large, ugly, wet toad crept through a broken pane of glass in the window, and leaped right upon the table where Tiny lay sleeping under her rose-leaf quilt. "What a pretty little wife this would make for my son," said the toad, and she took up the walnut-shell in which little Thumbelina lay asleep, and jumped through the window with it into the garden.

In the swampy margin of a broad stream in the garden lived the toad, with her son. He was uglier even than his mother, and when he saw the pretty little maiden in her elegant bed, he could only cry, "Croak, croak, croak."

"Don't speak so loud, or she will wake," said the toad, "and then she might run away, for she is as light as swan's down. We will place her on one of the water-lily leaves out in the stream; it will be like an island to her, she is so light and small, and then she cannot escape; and, while she is away, we will make haste and prepare the state-room under the marsh, in which you are to live when you are married."

Far out in the stream grew a number of water-lilies, with broad green leaves, which seemed to float on the top of the water. The largest of these leaves appeared farther off than the rest, and the old toad swam out to it with the walnut-shell, in which little Thumbelina lay still asleep.