Mention of dwarfs varies in almost all folklore from different countries. German mythology seems to be the earliest to actually mention dwarfs. In German and Scandinavian folklore and mythology, the term dwarf comes from the Norse 'dvergr' which is a type fairy that lives in the deepest parts of the mines. They are described as short human like beings, that for the most part, look like wrinkled old men with long beards. They are known to have magical abilities and a great knowledge of metallurgy.

The folklore from some countries say that dwarf women are thought to have beards and look very much like the men. There does not seem to be much difference in the appearances of the two sexes. It is thought that with no apparent females to give birth, many believe that Dwarfs grow out of stone from deep in their mines.

Even in the more recent fairy tales and folklore, there is very little mention of Dwarf Women.

In "Lord Of The Rings" trilogy, Tolkien describes Dwarf Women as having beards. He does not call them dwarfs, but dwarves. He suggests that they (Dwarve Women) seldom travel and are rarely seen. When they are seen, they look "in voice, appearance, and in garb" so much like the male dwarves that they are not noticed as females.

Have A Great Story About This Topic?

Do you have a great story about this? Share it!

This is a place I think a Dwarf mihgt live. It is said they like caves. 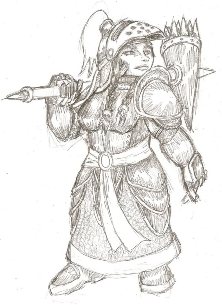 C. S. Lewis, who was a friend of Tolkien, describes his male dwarfs as being able to reproduce with humans which creates a race of half-Dwarfs. In his book published in 2008, Prince Caspian has both male and female dwarfs as archers. These female dwarfs, though similar to the male dwarfs, are beardless.

MMORPG "RuneScape", has female dwarfs as often as females from other races. MMORPG is an acronym for "Massive Multi-player Online Role Playing Game". RuneScape is this type of game.

In "Greyhawk", (One of these editions.) female dwarfs grow beards but sometimes shave.

In the "Discworld" novels, Terry Pratchett points out that female dwarfs with beards, creates a problem. He states that a major factor when courting is to 'tactfully find out which sex the other one is'.

"Arcanum: Of Steamworks & Magick Obscura" is a single or multi-player computer role playing game that seem to have only male dwarves. In this game, asking a male dwarve about their women is taboo and considered an insult.This is because birth of a female dwarf is a rare event. When Dwarf Women are pregnant they carry their babies for up to 10 years. This puts her health is at great risk during this period. This plus female births being less than 50%, males outnumber females by 2 to 1. To protect their women, they are concealed from others for most of their lives.

"Castle Falkenstein" is an RPG Game.This game has all male dwarves. When they do marry, it is to fairy women from other races. When the children are born, all the boys are dwarves and all the girls are the same race as their mother. 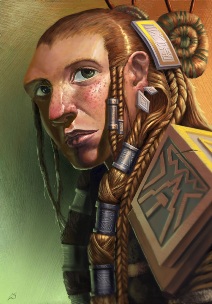 "Lineage II" MMORPG Game, has female dwarfs that look like young human girls. In contrast, the male dwarves look old and wrinkled. The females are taller with larger heads. This game is produced in Korea.

In "Warhammer World", the computer game, there are female dwarves but they are rarely seen since most dwarves are warriors. The women look similar to the males except that they have pig-tails in their hair instead of beards on their face.

In the third book, "Dark Whispers", there is a female dwarf named "Flensa" that was M'Gama's assistant. This book was published in July 2008. See: Dwarf Women Unicorn Chronicles Wiki page.