Chinese Dragons in Chinese culture,are compared to excellent and outstanding people, while incapable people with no achievementsa are compared to other, disesteemed creatures, such as a worm.
A number of Chinese proverbs and idioms feature references to a dragon, such as "Hoping one's son will become a dragon".
(simplified Chinese: 望子成龙; traditional Chinese: 朢子成龍; pinyin: wàng zǐ chéng lóng).

Chinese Dragons occupy a very important position in Chinese mythology. Ancient China Dragons show up in literature, the arts, architecture, poetry and many other places in Chinese culture. They are a symbol in the pagan religions. They posses great magical powers.

The Lung dragon, in Chinese mythology, is one of four main animal figures that were seen to be or rather believed to be well-meaning or were symbols of good luck. Of these the dragon, probably because of its obviously powerful image, became a symbol of the Chinese emperor.

Dragons were believed to possess powers that were related to nature and were associated with natural elements like rainfall, droughts and storms. Consequently, in Chinese art, dragon is a revered symbol. 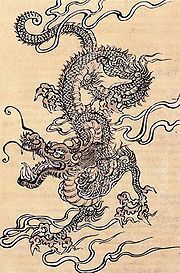 Dragon images are worshiped and treated with a great respect. They are shown on all types of Chinese art objects. These feelings about these dragon images are very old and date back to around 618AD.

Dragon Appearance--- Dragon Art, dragon clip art and dragon imagery of all types must have nine characteristics borrowed from nine different animals. That means that the China dragon is a combination of these nine animals.

China dragons are supposed to have a camel's head, fish scales, a stag's horns, the eyes of a rabbit, the ears of a bull, the belly of a clam and the claws of an eagle. Aside from this, a snake's image is demonstrated in the length of the dragon's neck. 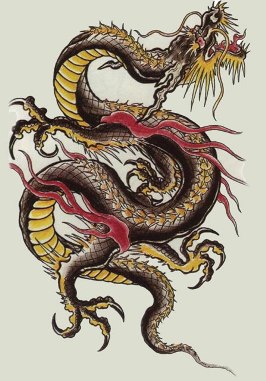 The Chinese Horoscope Dragon is the fifth of the 12 signs that make up the Chinese horoscope in Chinese Astrology.

It is known that Chinese astrology has been practiced in the Orient since the 40th century BC and it became very popular since the times of the Chinese Emperors Fu Hsi (2953-2838 BC) and Shen Nung (born in the 28th century BC).