Dwarves, How They Came To Be 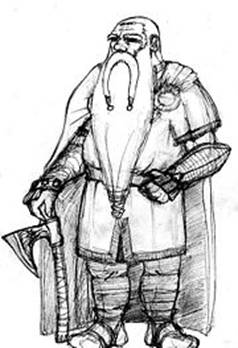 Dwarves are magical creatures that are associated with age and wisdom. Their pictures almost always are with beards.

They have great knowledge, particularly of craftsmanship. Metallurgy is one of their great skills. They are said to have made some of the great artifacts of legend.

The original concept of dwarves is very hard to get a clear picture of. The sources closest to the original Germanic mythology come from Norse Mythology, but even these are scarce and very varied. Death is a recurring motif in Norse Mythology, and ancestor worship is a prevalent practice.

Dwarves were certainly humanoid, but sources differ over their height, their lifestyles, and their similarity to elves. Early sources indicate the original dwarves were fully human height.

Dwarves in Tolkien are long-lived, living nearly four times the age of man (about 250 years), but are not prolific breeders, having children rarely and spaced far apart, and having few women among them. Dwarvish children are cherished by their parents, and are defended at all costs from their traditional enemies, such as Orcs.

A longstanding enmity between Dwarves and Elves is also astaple of the racial conception.

Female dwarves A long standing source of interest (and humour) comes from the allusion of Tolkien to female dwarves having beards. In addition they are rare creatures. A more cynical, and perhaps more realistic reason for this is that female dwarves (unlike, say, female humans or elves) lack sex appeal and consequently have little mention in folklore.