In Christmas Short Stories there are many different folk legends that deal with Christmas Spiders.

Most of these Christmas short stories originate from legends in Ukraine and Germany. In Germany, it seems there are many variations on the tale depending on the religious preference of the person telling the story. However, in all cases the association with spider webs and Christmas/Yule tree tinsels seems apparent. The fact that spiders are small and in fact are still important.

Spider Legend from the Ukraine 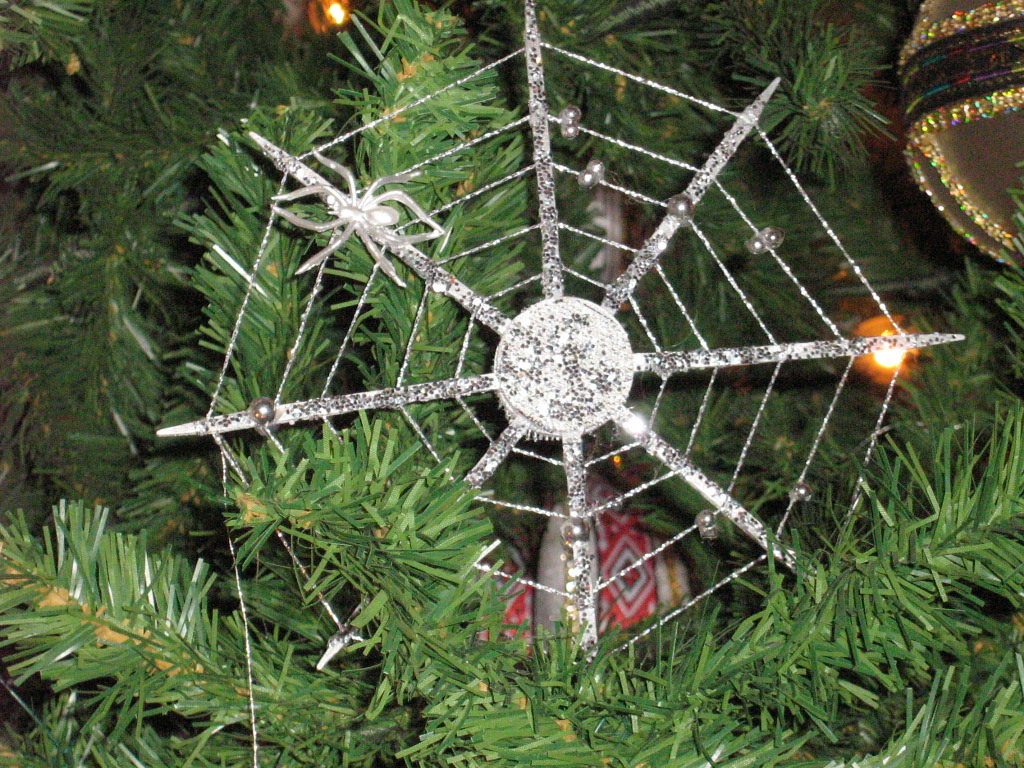 A folk legend version from the Ukraine)

There once was a widow, who lived in a small hut. One day a pinecone dropped on the floor and it took root.

The widow went to bed on Christmas Eve knowing that the tree would not be decorated. Early on Christmas morning, the woman was awakened by her children. “Mother, mother wake up and see the tree it is beautiful!” The mother arose and saw that during the night a spider had spun a web around the tree.

The youngest child opened the window to the first light of Christmas Day. As the shafts of the sun crept along the floor, it touched one of the threads of the spider web and instantly the web was changed into gold and silver. And from that day forward the widow never wanted for anything.

[text copied from Museum of Science and Industry Archives]

Once upon a time, long ago, a gentle mother was busily cleaning the house for the most wonderful day of the year…. The day on which the Christ child came to bless the house. Not a speck of dust was left. Even the spiders had been banished from their cozy corner in the ceiling to avoid the housewife’s busy cleaning. They finally fled to the farthest corner of the attic.

T’was the Christmas eve at last! The tree was decorated and waiting for the children to see it. But the poor spiders were frantic, for they could not see the tree, nor be present for the Christ child’s visit. But the oldest and wisest spider suggested that perhaps they could peep through the crack in the door to see him. Silently they crept out of their attic, down the stairs, and across the floor to wait in the crack in the threshold.

Suddenly, the door opened a wee bit and quickly the spiders scurried into the room. They must see the tree closely, since their eyes weren’t accustomed to the brightness of the room… so the crept all over the tree, up and down, over every branch and twig and saw every one of the pretty things. At last they satisfied themselves completely of the Christmas tree beauty.

But alas!! Everywhere they went they had left their webs, and when the little Christ child came to bless the house he was dismayed. He loved the little spiders, for they were God’s creatures too, but he knew the mother, who had trimmed the tree for the little children, wouldn’t feel the same, so He touched the webs and they all turned to sparkling, shimmering, silver and gold!

Ever since that time, we have hung tinsel on our Christmas trees, and according to the legend, it has been a custom to include a spider among the decorations on the tree.

Christmas Short Story
A German Tale About Spiders And Tinsel

If you’ve ever gazed at the beautiful tinsel sparkling on your Christmas Tree and wondered who came up with idea of decorating the tree in this way, wonder no longer. According to German legend, it signifies a Christmas miracle from many years ago.

The day before Christmas, as the small house in Germany underwent its Christmas Eve cleaning, the resident spiders, not wanting to be swept up with the broom, hid in the attic.

When nightfall came and all were settled into bed, the spiders crept downstairs. To their amazement, in the middle of the living room was a beautifully decorated Christmas Tree.

They were so excited that they ran all over the tree. They scurried up the trunk and leapt from branch to branch. Unfortunately they had left their mark. A gray spider web now covered the whole tree.

When Weihnachtsmann, also known as Father Christmas, arrived he was amused to see the tree covered in spider webs. Now he faced a dilemma. The family would be disappointed to see their beautiful tree all wrapped in the webs, but the spiders were so pleased with their handiwork that he did not have the heart to take it down. What could he do? He thought and thought and came up with a wonderful solution. He turned all the webs into beautiful shimmering silver strands.

When the family awoke on Christmas Morning they ran to the living room and saw their tree sparking and glittering in the morning sun. Their delight was unsurpassed. They had never seen such a beautiful tree. Only the mother knew that a true Christmas miracle had occurred overnight.

From that day on tinsel became a treasured ornament for trees all over the world. Those who know the legend make sure that they give thanks to the industrious spiders by hanging a beautiful silver or gold spider ornament in a prominent location on their tree. 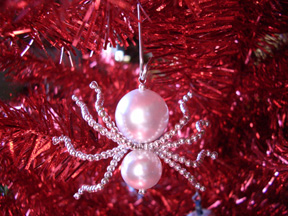 Another Tale from Germany)
Another story comes from Germany about spiders and Christmas trees.

Long ago families allowed their animals to come inside and view the Christmas trees on Christmas Eve. Because the Christ Child was born in a stable, they felt that the animals should take part in the Christmas celebration. But spiders weren’t allowed because housewives didn’t want cobwebs all over everything.

Of course the spiders were unhappy about this, so one year they complained to the Christ Child. He felt sorry for them and decided that late at night He would let them in to see the trees. The excited spiders loved the Christmas trees and all night long they crawled about in the branches, leaving them covered with webs.

On Christmas morning the housewives saw what the spiders had done. But instead of being angry, they were delighted. For in the night the Christ Child had turned all of the cobwebs into sparkling tinsel.

And even today, tinsel is often used to decorate Christmas trees to add that same sparkle the Christ Child gave the cobwebs long ago, in Germany.