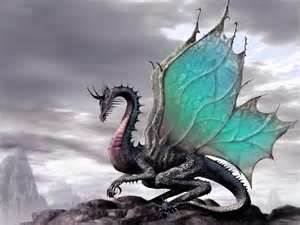 Medieval Dragons images from the Middle Ages history, tend to date the mythical creature from a later period than the ancient China dragons. Unlike the Chinese dragons, these dragon images show this creature to be destructive and evil. Also, dragon artwork from this time almost always show evil dragons. (See Picture)

Dragon Images from this time period seem to have a lot of alligator and snakelike characteristics. Most have an alligator's head plus maybe lion's front legs and eagle's feet. Some have wings and can breath fire. (See Dragon Definitions)

These Ancient Dragons are sometimes known as European dragons or Draco. They are portrayed as evil, and fierce man-eating reptiles that have a tail and wings. They have the magical ability to fly and breath fire. These characteristics tend to be very dangerous and can literally destroy many of the Middle Age villages.

According to Western folk tales from the renaissance, these dragons have some strong magical abilities. They collect treasure and gem stones from the villages they sack and guard it very ferociously usually in a cave. 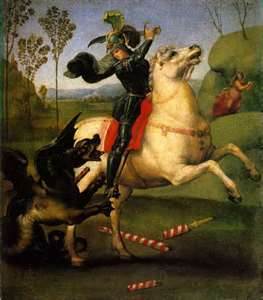 From the ancient most sacred writings of the Hebrews, the dragon represented evil and death. Early Christianity adopted this belief which shows up in many parts of the Bible. Christian art often depicts the dragon as representing sin. Within this art you will find the dragon being destroyed by saints and martyrs to demonstrate winning the battle between Christianity and the Pagans.(See Picture on left.)

Encarta98 Definition: A legendary reptilian monster similar in form to a crocodile and usually represented as having wings, huge claws, and a fiery breath.

2:a fabulous animal usually represented as a monstrous winged and scaly serpent or saurian with a crested head and enormous claws.

1. a. A fabulous monster, represented usually as a gigantic reptile breathing fire and having a lion's claws, the tail of a serpent, wings and scaly skin. b. A figure or other representation of this creature.