Mermaids Have Been Around For Centuries

Mermaids are legendary creatures that live in the sea and have the upper body and torso of a female human and the lower body of a fish.The word is derived from (from the Middle English mere in the obsolete sense 'sea' (as in maritime, the Latin mare, "sea") + maid(en)). Merman is the name given to the male version and merfolks or merpersons is given to them as a group.

From the Diary of Christopher Columbus January 9, 1493
The day before, when the Admiral was going to the Rio del Oro, he said he saw three real mermaids who came quite high out of the water but were not as pretty as they are depicted, for somehow in the face they look like men. He said that he saw some in Guinea on the coast of Manegueta.

Almost all cultures from all over the world are know to have similar legendary creatures that live in the sea. The term was sometimes used interchangeable with the term Siren, in fact, some languages use the same word for both creatures.

In legends these creatures would serenade sailors and enchant them. This would distract the sailors from their work and sometimes cause them to walk off the deck or cause shipwrecks. Other stories would have them squeeze the life out of drowning men while trying to rescue them. They are also said to take men down to their underwater kingdoms and teach them to live in the sea..

In Hans Christian Andersen's story  it is said that they forget that humans cannot breathe underwater, while others say they drown men out of spite. The Sirens of Greek mythology are sometimes portrayed in later folklore as creatures very similar; . Other related types of mythical or legendary creature are water fairies (e.g. various water nymphs) and selkies, animals that can transform themselves from seals to humans. Prior to the mid 19th century, mariners referred to Manatee and Dugongs as these creatures. 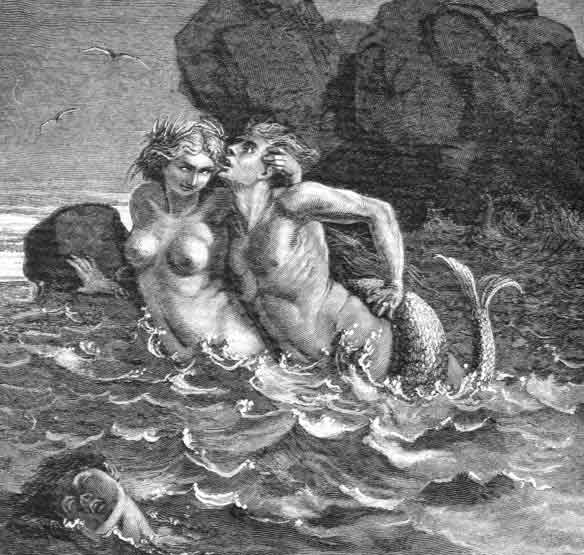 These legendary creatures have been enduring symbols in myth and culture for thousands of years. They continue to have a very visible role in contemporary society in advertising, movies and our culture in general. Each year The Coney Island Sea Creature Parade occurs the first Saturday after the summer solstice around the third week of June, hundreds of these sea nymohs, Neptunes, mer-men and hundred of thousands of spectators descend upon Coney Island, New York to celebrate the beginning of Summer and the official opening of the Atlantic Ocean. What is this powerful attraction that is so compelling? Why do five hundred thousand people turn out for this Parade?

I think to answer those questions one must look at the historical myths and legends that tell the stories of sea creatures, Sirens and other Goddesses.