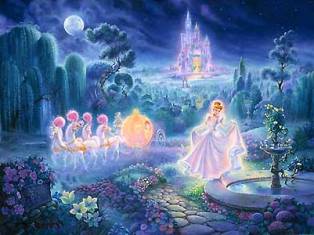 Cinderella and Her Carriage

The most famous of the many Cinderella Fairy Tale versions was written in 1697 by French  author Charles Perrault. Disney's version was one of the most popular versions taken from this authors work.

Some of the  characters from this version include:

Ella - The heroine of this fairytale.

Stepmother - the antagonist in this fairy tale.

The Prince - that she ends up Marrying.

The Two Step Sisters - that treat her very badly .

A Fairy Godmother - Dresses Cinderella and turns a pumpkin and some mice into a beautiful Chariot.

Glass Slipper - Not one of the Characters, but it plays a very important part in this Fairy Tale

This is from one of the versions from Charles Perrault.

The story opens about a handsome man who's wife had died. They had a beautiful daughter named Ella. Ella was a girl of unparalleled goodness and sweet temper.

After some time passed the man married a widower that had  had two daughters. They were not at all attractive, very selfish and very jealous of Ella.

The Stepmother made Ella the maid, do the cooking and all the housework. When the girl had done her work, she was made to sit in the cinder box by the fireplace. This caused her to almost always be covered with ashes and cinders. Because of this she was given the nick-name of "Cinderella". The poor girl bore it patiently, but could not tell her father as he was completely dominated by his wife.

The Prince, the King's Son, needed a wife.  So, He  invited all the beautiful single girls in the realm to a ball.  Ella's stepsisters were part of the group invited. As they dressed, Ella assisted them, but they still taunted her by saying a maid could never attend a ball.

When the two left for the ball, Cinderella cried in sadness and loneliness. A Fairy  appeared. It was her Fairy Godmother.  She would help Ella get to the ball.  To start with made a coach from a pumpkin.  She then made horses out of mice and a footman from a lizard.   Ella needed a beautiful gown. Her Godmother made the gown from the rags she was wearing plus a small pair of Glass Slippers. The Godmother then informed her that the spell will be broken at midnight She said for Ella to enjoy the ball, but she must leave by midnight, as everything would change back.

When Ella arrived, she dazzled the Prince  and every else in the court.  The Prince never left her side. She was unrecognized by her sisters as she danced with the Prince. She remembered she had to leave before midnight.

Ella was having such a good time that she stayed too long.  At the  stroke of midnight, as she hurried to  leave, she lost a glass slipper. The Prince tried to catch her  without success. The guards had seen only a country wench leave. The Prince found the slipper and promised that he would search for the girl that fit the slipper until he found her.  Then he would marry her.

Back home, She thanked her Godmother. She then greeted the Stepsisters who could talk of nothing but the beautiful girl at the ball.

The Prince searched all the realm with the slipper trying to find the beautiful girl that the slipper fit. The Stepsisters could not fit. They teased her but she still asked if she might try it on. It was a perfect fit, and she then put on the other slipper. The two stepsisters pleaded with Ella and she forgave them for their cruelties.  The Prince escorted Ella  to the palace.  They were married at a huge ball.

In another of the versions of Cinderella Fairy Tale, the sisters are made to dance until their feet fall off.   (The Folktale as Written)

Moral of the Cinderella Fairy Tail

"Beauty is a treasure, but graciousness is priceless. Without it nothing is possible; with it, one can do anything."