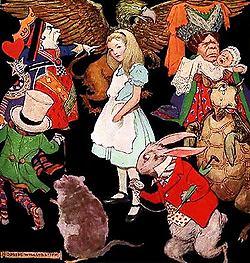 Alice In Wonderland with all her Characters

"Alice In Wonderland" is the title after it was shorten from the original fairy tale's title "Alices Adventures In Wonderland". It was written in 1865 by Lewis Carroll which was the pseudonym for Charles Lutwidge Dodgson. It is considered a classic example in English literature of the genre "literary nonsense".

How it came about

One July 4th afternoon the Reverends Charles Lutwidge Dodgson and Robinson Duckworth took the three Liddell children (All Girls) for a rowboat ride on the River Thames. The girls soon became bored on the five mile boat ride, so Reverend Dodgson told them a story about Alice, a bored little girl. It was no coincidence that the 10 year old girl in the boat was named Alice. In the story, Alice became bored and went off trying to find an adventure. All three of the girls loved the story. Alice Liddell asked Reverend Dodgson to make a copy for her. He promised he would.

.In the spring of 1863, according to Dodgson's diaries, he gave an unfinished hand written story of "Alice s Adventures Under Ground" to his friend and mentor George MacDonald to show to his children. The children loved it. MacDonald suggested that Dodgson submit "Alice" for publication.

In July of 1865 exactly three years after the boat ride, "Alice In Wonderland" by "Lewis Carroll" was published with illustrations by John Tenniel. Tenniel objected to the first print run of 2,000 because of poor print quality. All were destroyed except for 23 known copies. Eighteen of these copies have been purchased by libraries or major archives, one of which was the Harry Ransom Humanities Research Center. The other five are held by private owners). So a new edition was printed and released in December of 1865 but has a 1866 date. "Alice" was a sensation for the publisher. The entire print run sold out very quickly.

A young Oscar Wilde and Queen Victoria were among the first readers that fell in love with the "Alice s Adventures In Wonderland" story. Since then the book has never been out of print. Over time 120 languages have translations of "Alice s Adventures in Wonderland". In this country, we now call this book"Alice In Wonderland". There are over a hundred editions of this book, plus many adaptations especially in the theater and film with over 100 different editions of the book published..

Quotes From Alice In Wonderland

The word "Wonderland", from the title, has been accepted into modern English language. The word refers to a beautiful imaginary place. It can also refer to a real place that seems to have a dream like quality. Many additional terms from the the story are popular in today's culture. The White Rabbit. "Down the Rabbit-Hole", is a popular term for going forward into the unknown. By the same token , a "rabbit hole" in computer gaming refers is used for a place new gamers can enter the game. "Going down the rabbit hole" by drug users is a metaphor for taking drugs.

When the Cheshire Cat disappeared it prompted Alice's much published comment "...a grin without a cat! It's the most curious thing I ever saw in all my life!".  See more about these wonderful characters HERE!